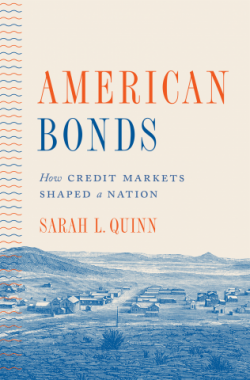 Sarah Quinn and her new book, American Bonds: How Credit Markets Shaped a Nation, were profiled in the Spring/Summer issue of the ASA Economic Sociology Section Newsletter. In an interview with Barbara Kiviat, Sarah Quinn discussed how and why policymakers have turned to credit as the solution to social, economic, and political problems. Here is a brief excerpt from the interview below:

Barbara Kiviat: In discussing how the government has increasingly turned to loans and loan guarantees to accomplish various policy goals, you talk about “political lightness of credit.” What do you mean by that?

Sarah Quinn: Take the Farm Loan System I just discussed, where a systematic overhaul was downplayed as a way to bolster self-help. I think this illustrates a kind of ideological lightness. Because credit is abstract, it can plausibly be discussed in different ways. That kind of ideological flexibility is just one of credit’s advantages as a policy tool. Credit allocation doesn’t necessarily require a large administration, and it is relatively easy to take off budget. I use the phrase political lightness of credit to capture the ways that credit might be easier to use than other kinds of expenditures. It is why credit is such a popular, multi-purpose tool of statecraft. Tax expenditures, nudges and public private partnerships share many of these qualities.

Barbara Kiviat: Who have been the big the winners and losers of putting credit programs at the center of the American political economy?

Sarah Quinn: In credit markets, people convert their social status and resources into actual cash at different rates. In the context of white supremacy, this has always benefited white people. In the context of patriarchy, this has benefited men. In the context of militarism, this has benefited soldiers. When governments get involved, these inequalities can be magnified. This won’t be news to sociologists. Stratification scholars have long shown that housing credit programs like the FHA and Home Owners’ Loan Corporation are engines of racial inequality, and that white borrowers are the big winners in U.S. credit markets relative to other groups.

Beyond that, who wins and losses depends on the time, place and policy. Credit is a part of any political economy, and people need access to credit for a variety of reasons. Today wages are low, inequality is high, regulations are shredded, and many people are forced to borrow large amounts – at exorbitated rates if they are poor – to meet basic needs like housing, transportation, education, and healthcare. That is bad for anyone who isn’t wealthy, catastrophic for poor families, and lenders are the big winners.  For earlier periods, the story is more complex. In the postwar era, stricter regulations meant lenders were not in fact runaway winners in credit markets.

Who gets access to what kinds of credit markets, whose risks are covered, whose obligations are locked-in, where the profits go, the extent to which publicly supported industries are taxed – all of these things matter when talking about winners and losers from the credit state.

Barbara Kiviat: What lesson is most important for economic sociologists to take from your book?

Sarah Quinn: That U.S. government officials have long used land ownership, housing markets, and easy credit as policy tools. They did so in an elusive search for ways to avoid the redistribution of wealth while still ensuring widespread economic opportunity, and in search of ways to effectively govern within a complex and fragmented political system.

Barbara Kiviat: What does your argument mean for sociologists who study social policy?

Sarah Quinn: Don’t forget the credit programs! Government officials have an interest in defining any social problem a credit market failure, because that gives them access to credit programs as a low-cost policy tool. So whenever we see financial solutions offered for social problems – for example, when new types of loans are offered as a way to improve access to higher education – we should all ask: Is this really a problem of credit distribution? If not, why is the problem being framed this way?