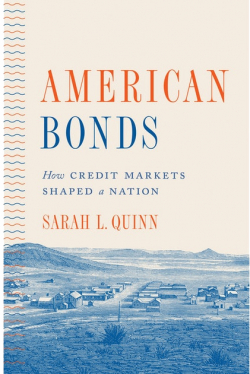 Sarah Quinn’s book, American Bonds: How Credit Markets Shaped a Nation has won the Viviana Zelizer Award for Best Book in Economic Sociology for 2020. This award was recently announced by the Economic Sociology section of the American Sociological Association. The committee felt the book has already majorly influenced how Americans understand our current moment, and praised the book:

“…makes a serious case that the sociology of credit institutions should be at the core of any macro-level economic sociology.”

“It connects its analysis of markets and finance with the production of structural inequalities in a new way that has great potential to political economy scholars, postcolonial scholars, and those interested in the structural and historical backdrops of predatory inclusion. Deeply historical, but still completely relevant to contemporary economic sociology questions.”

“The theoretical approach on credit as a time machine ... can be turned into a comparative research program at multiple scales of analysis.”

“Given we are entering a great depression in the US, where the role of credit institutions in the social contract are going to be politicized to a large degree compared to the previous generation, this book [shows] that economic sociology can get at big and relevant questions.”

“…a touchstone—the kind of thing that literally anyone studying American credit will have to read and cite, for at least the next three or four decades, until time renders it out of date.”

Sarah Quinn’s American Bonds: How Credit Markets Shaped a Nation explores the evolution of securitization and federal credit programs from the nation’s early history, and how the U.S. government has used financial markets to manage and maintain complex social divisions that exist to this day.