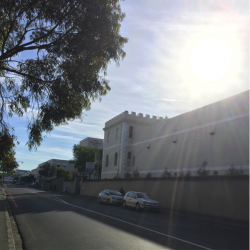 At the 2017 International Population Conference (IPC), held in Cape Town, South Africa, from 10/29 to 11/4, the IUSSP Scientific Panel on Big Data and Population Processes hosted three preconference workshops on demography and the Data Revolution. Of these, two were led by UW sociology faculty, Adrian Raftery and Emilio Zagheni. The workshops were held the weekend preceding the conference at the Breakwater Campus, a former prison housing the University of Cape Town Graduate School of Business.

Adrian Raftery and Hana Ševčíková led a two-day workshop on Bayesian Population Projections: Theory and Practice. The workshop combined lectures on Bayesian statistics with hands-on lab activities using R packages such as bayesLife and bayesPop. These probabilistic methods have been officially adopted by the UN Population Division for population projections. Because of this, it is particularly significant that this workshop was convened in tandem with the first IPC to be held in sub-Saharan Africa, where the majority of the world's population growth is projected to occur. Accordingly, African researchers, who may have had fewer opportunities to learn these cutting-edge methodologies previously, were well-represented among the participants. Many of these participants were Francophone; Dr. Raftery invited them to pose their questions in French, in which he is fluent.

Emilio Zagheni and Connor Gilroy led a daylong workshop on Social Media, Big Data and Digital Demography. This workshop covered technical subjects like web APIs and OAuth credentialing, as well as examples of current demographic research using digital methods. Over the course of the day, participants moved from retrieving conventional Census data with programmatic web methods to using these same techniques to access streaming and search data from Twitter and advertising data from Facebook. Additional modules focused on transforming and visualizing the data thus obtained. Participants in this workshop were diverse, and their goals for using digital trace data for demography were equally so, from investigating women's responses to domestic violence on Twitter in France, to observing reactions to the work of nonprofits on Facebook in India.

The code and lecture slides for the digital demography workshop are available in their entirety on GitHub, at https://github.com/CSDE-UW/IUSSP-digital-demog-2017. This resource has already begun to circulate among demographers—via Twitter, naturally.