Starting Graduate School During a Pandemic 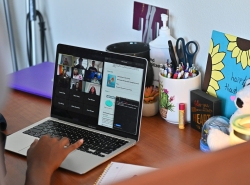 Seven courageous students started our graduate program last fall, at the height of the pandemic.  From virtual orientations to remote classes, online TA duties and Zoom stats study session, their first year experiences have been like no other.  Most still haven’t set foot on campus or inside Savery Hall, let alone met their colleagues in person.  How have they navigated the challenges of acclimating to graduate school while remaining physically isolated?  Did they manage to build supportive and academic ties through virtual interactions? Read on as two graduate students tell about their first year in the Sociology PhD program.

Aryaa Rajouria is a first-year PhD student in the Sociology department at UW. Her research interests include migration and displacement, climate change and natural disasters, and systems of social stratification.

Given that I began graduate school amid an unrelenting global pandemic, to some extent, I saw this coming. After the first day of virtual orientation, I carried with me the image and expectation of becoming a lone academic. I imagined spending my first year of graduate school stewing over the words of DuBois, critically engaging with the works of Marx, and diligently working to master R—alone.

At a global and local level, the pandemic dismantled any semblance of normalcy. This extended period of social distancing, the continued devastating loss, and the unknown future that looms ahead of us has called for resilience beyond measure. Moving to a new city during such a time was a double social displacement: not only did I not know anyone in Seattle, but the pandemic also suggested that I would not meet colleagues or make friends in person for at least a year. As an international student who has not had the opportunity to go home in three years, this emotional experience was expected to be amplified. Yet, I am familiar with connecting at a distance. From missed births to missed deaths to jump roping between time-zones, the very nature of leaving home in the pursuit of education calls for sacrifice—some that you will not even know you are making until you are across the world during a global pandemic, and they close the borders.

Given this context, I was expecting my first year of graduate school to be a deeply solitary experience. To be quite honest, a large portion of my year has been solitary—I read alone, I write alone, I grade alone, I go for walks alone, and I eat alone. However, there is significant evidence that suggests that the only reason I have reached the tail end of my first year, still somewhat intact—has been because of community, even if it has largely been a virtual community.

As a result of daily class discussions, regular meetings with my advisors, weekly cohort check-ins, meetings with my peer-mentor, Statistics study groups, and research working groups, I might not be walking around Savery Hall, but I am constantly intellectually engaged. There have been times this year in which schoolwork and academia have been a welcome distraction to the crumbling outside world. Other times, of course, it has been simply impossible to focus on work. Even in the midst of this excruciatingly difficult time, I have expanded my statistical analysis skill set, learned the basics of R, read extensively, learned the art of being a Teaching Assistant, and even selected a master’s thesis topic. During these learnings, I participated in peer study groups that turned into friendships through Zoom. One of the reasons I chose to pursue my PhD at the University of Washington was the emphasis on collaboration (along with rigorous methodology!). While I believed the pandemic would postpone the sense of an intellectual community, I was wrong. Even through these times, I have learned more than I expected about myself, my research interests, and the field of Sociology in general. This knowledge, I am certain, will translate as we slowly pave our way into a post-pandemic world. I am grateful to be growing into a Sociologist in a community of kind and brilliant scholars that have made me feel less alone this year.

Larissa Caldeira is a first-year PhD student from Spokane, WA. Her research interests include the sociology of religion, institutions, and social movements, and she is currently studying spatial and temporal diffusion of a lay Catholic movement in the United States.

I did a lot this year. I learned to code, took three graduate courses in statistics, put together a research proposal, started working with the data for my MA, and met a ton of incredibly smart, kind,  and welcoming people. All in all, I came out of 2020 better than I went in; I’m proud to have been able to pull that off.

It took a long time to write that because I wasn’t sure how to reconcile it with another opening sentence I considered: “my year was characterized by mental distress.” Both of them are equally true, and the space between those two views is filled with supportive friends, compassionate colleagues, generous graduate students, therapy sessions, pet emergencies, family emergencies, family celebrations, national emergencies, and a million other things that are going to take years to process.

Ultimately, all I can say about beginning graduate school in a pandemic is that it is both difficult and rewarding. Many mechanisms of support don’t translate to the virtual environment, but that doesn’t mean that new mechanisms of support don’t arise. Other graduate students poured their hearts into making this transition as smooth as possible: taking it upon themselves to program virtual events, organize personalized mentorship to fill a persistent gap, and being honest about the struggles, benefits, and true potential of this department.

The pandemic exposed what was wrong, right, efficient, and inefficient about every facet of our lives, including the institutions that order them. A person’s true character is often revealed in times of crisis, and although beginning this journey in such an unprecedented time was distressing, it offered me a unique opportunity to interact with the department and others in this universally distressing time. As we move out of this era, I am confident that we won’t go “back to normal,” but that we will be able to construct a better one based on what we learned from this time.