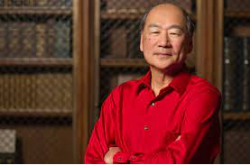 It’s not unusual for sociologists to discover their calling late. Musicians, mathematicians, artists, and doctors may know even as kids what they will be when they grow up, but there just aren’t a lot of youngsters dressing up as sociologists for Halloween. Of course, you don’t find a lot of longitudinal data play sets at Toys R Us, either. Sociology is disadvantaged when it comes to kid appeal.

But once a young scholar destined for sociology actually finds it (usually in college), the path to graduate study, post-doctoral research, and finally to a tenure track job is pretty straightforward, if not exactly quick. Not so for David Takeuchi; he took the road less traveled. Way less traveled. He sometimes calls himself an “Accidental Sociologist.”

Today Professor Takeuchi has a long and impressive resume of publications, grants, and honors. But when he was growing up in a working-class family in Hawai’i, he had no notion of an academic career. For most of his school years, he never even dreamt of college. His main academic ambition was to finish high school. He had no scholarly role models at home. His father, Hideji Takeuchi, joined the labor force right out of 8th grade, exhausting his youth in Hawaii’s pineapple and sugar cane fields, ultimately working out his final years as a janitor. David’s mother, Chieko, waited tables during the day, then hustled tips as a barmaid at night. She was a high school graduate, though, and hoped for as much for her son.

In the summer after his junior year, David decided to at least try for college. He applied somewhat randomly to six different universities, and was accepted at all six, including two prestigious West Coast institutions. He chose the University of Hawai’i, fearing that he wouldn’t be smart enough, or able enough, to succeed at a mainland school.

But success at UH initially seemed elusive, too. Without the study habits, discipline, social support network, or family background that other students invisibly brought along to help negotiate the rigor of university studies, David foundered. Too many weeknights out drinking beer, and too many lectures missed the next morning as a result, made for an academically disastrous freshman year. The university put him on academic probation.

He decided to take his probationary year on the mainland, studying at George Williams College, in Downers Grove, Illinois. The decision turned out to be pivotal, and transformative. On the mainland David discovered race, racism, and difference in a directly personal way. He met them in a constant, unrelenting barrage like nothing he’d experienced in Hawai’i. At first he laughed off catcalls of “Pearl Harbor,” “pineapple,” and “slant eyes,” as meaningless, but over time he came to understand them as a way of marking him as different, outside, and other. Driven by his experience, he immersed himself in study. He read voraciously on race and racism, both fiction and non-fiction, and especially works by African American authors. His “aha moment” came with Ralph Ellison’s novel, Invisible Man, which at once stoked his intellectual drive to study race, and crystalized his internal struggle to understand it. That school year ended with the fateful assassinations of Martin Luther King, Jr., in April, and Bobby Kennedy, in June. The losses rocked David personally, even as they rocked the world, and molded his ideas about scholarship, race, and politics from then on.

David dove back into the University of Hawaii with a vengeance. He retook all his flunked courses and converted the F’s to A’s. He majored in sociology with a focus on immigration and race, and his revitalized momentum propelled him right through his BA and into the PhD program in sociology. He continued ticking off milestones until he hit another hard setback.

David drafted his doctoral dissertation prospectus on social factors in vaccine reluctance. One member of his committee sent the draft on to a prominent medical sociologist for comment, and when the blistering review came back, elected to show David the full text. The assessment was crushing, going so far as to question whether David belonged in a PhD program at all. Despite faculty encouragement, David felt too humiliated and demoralized to forge ahead. He dropped out of the program.

Seen in retrospect, the next seven years were a sort of gift. David took the research and analytical skills learned in graduate school and brought them to bear on practical challenges faced by community groups and residents, policy makers, and activists and through that applied focus developed experience studying problems of homelessness and housing shortage, racial tension between groups, education programs for immigrants and refugees, and alternatives to prisons. All the while he kept abreast of the academic literature and theory on these same social problems. Sometimes, he wondered whether he should go back and finish his doctorate, but, plagued with self-doubt, he made no move to return.

In a moment of hope and whimsy, he decided to apply for the American Sociological Association’s Minority Fellowship program. Hope was not misplaced. Very much to his own surprise, Takeuchi was awarded the fellowship. Even more than the money, David was encouraged by the validation and collegial confidence in his ability to do the work that the funds represented. He went back, and finished his PhD, and on to do post-doctoral work at Yale.

The story doesn’t end there, of course. David Takeuchi’s path to the University of Washington continued to be a winding one, full of side trips, setbacks, and interesting pauses, ever non-traditional. It was another five years after Yale before David accepted his first academic position. He has been winding his way through the academy ever since. And every back road traveled has added depth and breadth and nuance to his perspective on social problems. He likes to quote Robert Frost in describing his own career path:

Two roads diverged in a wood, and I—
I took the one less traveled by,
And that has made all the difference.

Professor David Takeuchi is a scholar of race, a researcher, teacher, mentor, and scholarly collaborator, all while serving as Associate Dean for Faculty Excellence, in the UW School of Social Work.