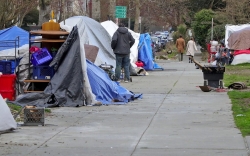 A study led by Keren Snedker, Charles Lanfear, and Lindsey Beach on the growing tent cities in Seattle, was recently featured in The Seattle Times. The study reported that the presence of tents within Seattle's urban core has increased by about 50% since before the pandemic. The survey, which counted more than 800 tents pre-pandemic, was completed by researchers at Seattle Pacific University and University of Washington. Though the majority of Seattle's unhoused may also live in vehicles and shelters, tents are considered the most concerning and most visible aspect of the homelessness crisis.

“As someone who’s always been attuned to it and noticed it when it was kind of on the fringes 20-odd years ago, I’ve definitely seen it increase with my own eyes, in my own neighborhood,” Snedker said. Residents worry that the city isn't prepared for numbers to increase even further after the eviction moratorium is set to expire in the summer of 2021. This will not only affect people living in tents, but also those living in vehicles or RVs.

Unhoused people tend to pitch their tents near clinics or hygeine centers, essential services, and other resources, but the growing encampments also has neighbors and businesses outraged. While the city has turned to federal money to fund new shelter spaces, the Federal Emergency Management Administration doesn’t pay for expensive things like mental health treatment. With shelters shrunk due to fears of coronavirus spread, and with limited space