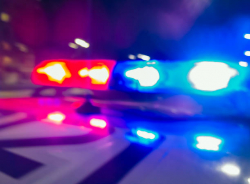 Annie McGlynn-Wright, who received her PhD in Sociology from the University of Washington in 2019, explains the results of a new study she worked on exploring the consequences of early interactions between police and Black youth. Robert Crutchfield, a professor emeritus of the UW Sociology department, was also involved in the study.

The results of the UW study, which was published in late October, were straightforward: Police encounters during childhood increase the risk of arrests in young adulthood for Black students, but not white students.

The study, launched nearly 20 years ago, comes in the midst of a national racial-justice reckoning and after months of protests after the police killing of George Floyd in Minneapolis. In Seattle, demonstrations for Black lives continue on Capitol Hill and in downtown nearly every day.

The study “just kind of reinforces much of what we’ve been focused on in the last eight months after the tragic death of George Floyd,” said Kevin Haggerty, a professor in UW’s School of Social Work and a co-author of the research. “And it really brings that to light in a very real way.”

While past research on race and policing has shown evidence Black Americans experience more frequent police stops and are more likely to have a negative experience during those stops, UW researchers noticed there wasn’t as much information about the long-term consequences of those early experiences with law enforcement, said McGlynn-Wright, a postdoctoral fellow at Tulane University who led the study while pursuing her doctorate at UW.

“There was some sense that early contacts might matter … but (no studies) that we were aware of how that might be different by race,” McGlynn-Wright said.

Read more at The Seattle Times