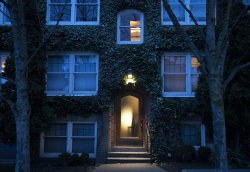 Graduate student Ian Kennedy has published a paper in Social Forces that takes a closer look at how rental ads may contribute to continuing Seattle's long history of residential segregation. The study was co-authored by alum Chris Hess (PhD 2019), Amandalynne Paullada and Sarah Chasins. Hess is now a postdoctoral scholar in the Department of Policy Analysis and Management at Cornell University.

Kennedy's research responds to a recent audit study by the City of Seattle's Office of Civil Rights that found evidence of discriminatory treatment in a majority of Seattle rental units, despite the federal government's ban on housing discrimination over 50 years ago. Rather than trying to directly observe discrimination, Kennedy and his collaborators collected the text of thousands of rental listings from Craigslist and used modern text analysis algorithms and models to investigate whether and how racialized features are encoded in the language of rental advertisements. They found that in areas with more non-white residents, rental ads emphasized buildings' safety, privacy, and amenities whereas in predominately white areas ads described neighborhood walkability and community, and “vintage charm.” This racialized language affects the up to 40% of renters in the Seattle area. While the study doesn't draw conclusions about whether the language in rental ads directly affects neighborhood segregation or increases gentrification, the authors speculate that racially coded language may signal to apartment hunters where Seattle’s white residents live, prompting them to exclude certain neighborhoods from their housing search.

Read more about this study at KING 5, the Seattle Times, or listen to an interview with Ian at KUOW.