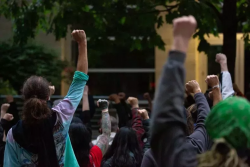 Companies, organizations and institutions are issuing public statements as anti-racism protests and calls for criminal justice reform continue across the nation. The CEOs, presidents and commissioners of clothing brands, grocery store chains, universities, sports teams and more know they can't stay silent while millions of Americans march against systemic racism, police brutality and a white officer kneeling on the neck of an unarmed black man for 8 minutes and 46 seconds.

Of course, they're right. It's unacceptable not to acknowledge the horrific racist violence that killed George Floyd in Minneapolis—and now Rayshard Brooks in Atlanta and so many more. Say the victims' names. Say that you stand with the black community. Say that black lives matter.

But the words are empty without real change.

They describe in corporate-speak being "greatly saddened" and sending "heartfelt condolences," while encouraging Americans to "be part of the change." Other messages speak to the black community directly, noting that "we stand with you" or "we stand in solidarity." Some are bolder, stating that we must "dismantle white supremacy."

All these statements ring hollow. They have become performative in nature. They are a way of showing on social media that you see our pain and are down with the cause in general—without going too far. Because, of course, you don't want to alienate the portion of your base that doesn't see systemic racism or want structural change. Congratulations. Many of your marketing and communications departments have walked this tightrope well.

Read the full article at Newsweek