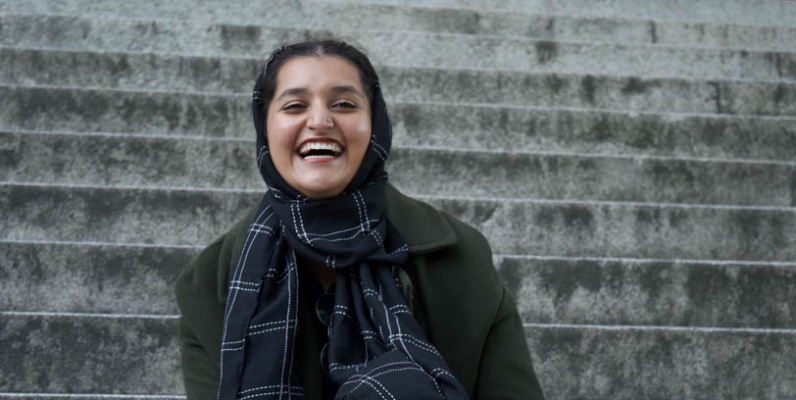 Alizay is an undergraduate sociology major and assistant director at SARVA (Sexual Assault Relationship Violence Activists). SARVA is a student group on campus that works to combat sexual assault and relationship violence at the UW, where activists advocate for survivors by holding open office hours and collaborating with student groups across campus, acting as liaisons between the student body and the many resources available for survivors of relationship violence and sexual assault.

Because talking about sexual or relationship violence can be so taboo in many communities, having the diversity of UW students reflected in its advocates at SARVA makes a huge difference to the UW community. As a hijabi Muslim student, Alizay expressed that holding open office hours makes it so other muslim survivors of sexual violence are more likely to seek out support. “When I first joined SARVA,” Alizay Sajjad said, “my biggest goal was for the Muslim community and other people of color to feel like they had a voice to talk about sexual violence.”

SARVA is working on a documentary project. The video includes a number of voices -- not just from survivors -- and which draws on community resources, encouraging individuals to use their voice to end sexual violence. What most surprised Alizay was the variety of answers, especially about the definition of consent. “There are a variety of answers and so many misconceptions. It can make me so uneasy. We really need an agreed upon definition of what consent is.”

After taking the SOC 402 Education Practicum taught by Erin Carll, she noticed how sociology informs her advocacy and makes connections that are hard to see from the surface. “Sociology breaks things down to the micro-level. The problems go much deeper.” Studying sociology also unlocks possibilities for Alizay, who feels that the major has helped her think beyond her own experiences. For her, sociology not only helps her understand why things are the way they are, but also how things could possibly be.

If you’re facing sexual or relationship violence, here are some resources available to you on campus: