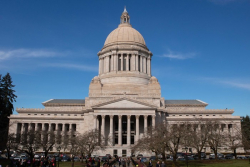 Most recently, Governor Inslee signed a bill that extended the requirement that landlords give tenants 14 days notice before evicting them, ending Washington’s draconian 3-day pay-or-vacate statute, and increasing due process. This bill was brought about in part because of evidence assembled by Tim Thomas (PhD ’17, current eScience postdoc) and his collaborators including Ian Kennedy. Reducing evictions, which disproportionately affect the poor and people of color, will have a major impact on reducing the housing crisis in King County.

More public sociology is being done by Alexes Harris, Tyler Smith, and others who have recently published a paper in Criminology and Public Policy that reveals the extent to which private firms are profiting from the fines and fees paid by inmates and others under the control of the corrections system. Alexes’ leadership on the issue of fines and fees led to another recent change in Washington state law that makes some headway toward reducing the financial burden of court-imposed costs on those with limited ability to pay.