No Place Like Home: Wealth, Community and the Politics of Homeownership.  Written by our Visiting Scholar Brian J. McCabe 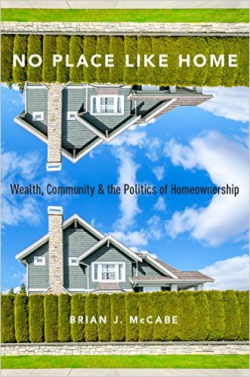 I began researching my dissertation shortly after the collapse of the housing market in 2007. Like many others, I was puzzled by the enduring place of ownership in American society. Although public support for homeownership policies dipped briefly as the housing market collapsed, it quickly rebounded. To this day, homeownership remains deeply popular. In fact, as I note in No Place Like Home, nearly all Americans – young and old, black and white, rich and poor – aspire to ownership and support policies designed to expand opportunities to own.

As I embarked on my research, I wanted to understand why Americans remained so deeply committed to homeownership. It quickly became clear that we value homeownership for many reasons – the ontological security it affords, the social status of owning a home and the opportunity to live among like-minded households, just to name a few. (Recognizing the multiple reasons that explain our commitment to homeownership, I have a forthcoming paper in Sociology of Race and Ethnicity that examines racial stratification in this preference.)

Early in the book, I draw on several homeownership campaigns from the 1920s and 1930s to show how political and business elites promoted ownership as a tool for creating upstanding citizens. Their arguments about homeowners as more active, engaged community members solidified into one of the primary justifications used to promote homeownership throughout the twentieth century. But during the mid- to late-twentieth century, buying a home also became the most important way for Americans to build wealth. In fact, we began to save through home purchases, rather than saving for them. Homeownership remains the most important tool for building wealth today.

Drawing on data from the Social Capital Community Survey and the Current Population Survey, I argue that the importance of building wealth shapes the way homeowners engage in their communities. Instead of simply emerging as civic-minded stewards of community life, I show that homeowners become involved as a way of protecting their property values. They fight changes in their neighborhood that they expect to lower property values. In doing so, I argue that their civic engagement often leads to communities that are more racially segregated and less economically integrated than they otherwise would be. Homeowners emphasize their position as tax-paying citizens to elevate their own voices. They nudge out discussions of the common good by centering public conversations on property values.

In my analysis, I make an argument for separating the civic benefits of ownership from the civic benefits associated with stability. These distinct ideas are conflated when we talk about homeownership. While some civic activities – attending a public meeting or voting in a local election, for example – are associated with ownership, other types of engagement – getting to know your neighbors or doing volunteer work – are actually the result of residential stability. This distinction matters for thinking about the types of public policies that reward particular housing choices.

As a sociologist concerned with the social impact of public policies, I wanted to contextualize my findings within the set of government programs that reward homeowners. Early in the book, I devote a chapter to the policies that created a nation of homeowners, including the development of the long-term, amortizing loan. Then, at the end of the book, I devote a chapter to a novel critique of the mortgage interest deduction – the largest tax expenditure for American homeowners. Most critics of the deduction argue that the policy is both regressive and inefficient – in other words, it both disproportionately benefits the wealthy and fails to expand ownership opportunities for households on the margin. While I agree with these critiques, I argue that the deduction contributes to patterns of racial segregation and economic inequality. By incentivizing Americans – and particularly wealthy Americans – to invest more in their homes, the deduction encourages the type of anti-civic behaviors described in No Place Like Home. (Extending this line of research, I have a new working paper that examines the sensitivity of public support for the mortgage interest deduction to critiques of the policy as costly, regressive and inefficient.)

No Place Like Home offers a timely and – I hope – provocative critique of this core American institution. I hope the book contributes to conversations about crafting more equitable ways to provide decent, safe housing to every American.

Brian McCabe is associate professor of Sociology at Georgetown University, where he regularly teaches course on urban studies, gentrification and housing policy.  He is a Visiting Scholar at the University of Washington for the Winter Term working on a new research project about Seattle's Democracy Vouchers program.