Sing, Uburied, Sing and Salvage the Bones, both by Jesmyn Ward.  Recommended by Judy Howard 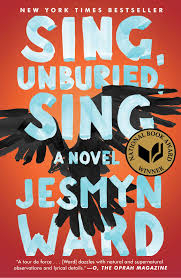 “I like to think I know what death is…. I try to look like this is normal and boring so Pop will think I’ve earned these thirteen years, so Pop will know I’m ready to pull what needs to be pulled, separate innards from muscle, organs from cavities. I want Pop to know I can get bloody. Today’s my birthday.” Thirteen-year-old Jojo utters these words as Sing, Unburied, Sing, opens.

With the announcement of the 2017 National Book Awards, Jesmyn Ward became the first woman to win two National Book Awards, the first for Salvage the Bones (2011), the second, awarded in November 2017, for Sing, Unburied, Sing (2017). The judges’ citation for this award writes: “Jesmyn Ward’s Sing, Unburied, Sing is a narrative so beautifully taut and heartbreakingly eloquent that it stops the breath. Through fully imagined characters both living and dead, this road novel moves beyond the road into the bigger story of what it means to be an American in the rural South both now and decades before this moment… The living and the dead confront racism, hope, and the everlasting handprint of history.”

Both of these novels stop the breath. Both compel the reader to enter a world that is too painful to turn away from, but so powerful, so beautiful, that you wouldn’t try. Sociologists, indeed anyone who does academic research on poverty, incarceration, health disparities, population crises, environmental injustices, migrations, family stressors, in short, anyone who explores inequalities, needs to read these works. We have statistics, reports, scholarly publications. But to feel the realities of the worlds these data describe, read these books.

Both books place their families in Bois Sauvage, based on DeLisle, a town in coastal southern Mississippi in which Ward grew up, and where she now again lives. Salvage the Bones is organized around Hurricane Katrina (which Ward’s own family barely escaped). In twelve chapters that trace the ten days before and during, and two days after Katrina hits, Ward follows four children and their father as they alternately try to prepare for the hurricane, but tend also to their immediate foci – pit bull China’s puppies, the dogfights that the neighborhood young men organize, the struggle of the daughter to figure out how she feels when she learns she is pregnant. The emotional currents are searing: the profound bonds between Skeetah and his dog China; Randall, who looks to a career in basketball as his fervent hope, but who always prioritizes caring for the youngest, Junior; Esch, the narrator and daughter, who fiercely monitors everyone, keeps them all together; and Daddy, who is convinced that with enough preparation for Katrina, they can survive. All of this is swept away as Katrina hits. Their loyalty to each other, their will to live, are impossible to communicate without reading the book. The final image of Skeetah sitting by the fire he has built, waiting for China to find him, will stay with the reader for a long, long time.

Sing, Unburied, Sing is told by a 13-year old boy Jojo, and alternately by his mother, Leonie. Jojo and his 3-year old sister Kayla have been raised mostly by their grandparents. Kayla treats Jojo as her only parent, her only refuge. The children’s father, Michael, is white – Leonie and her parents are black. Michael is in Parchman, the notorious Mississippi prison. When Michael is released, Leonie and her children set off on a road trip to pick up Michael. En route, they and a white female friend of Leonie’s whose partner is also in Parchman, stop for a drug-infused couple of days. Two ghosts, one Leonie’s brother Given, who was killed in a hunting expedition, and the other a boy who died in Parchman when Leonie’s father was there, linger amidst the group. Haunting them all is the knowledge that Mam, Jojo and Kayla’s grandmother, will soon die of cancer. The luminous passages about her death shine.

To read Ward’s work is to grasp the feel of poverty, to know the fierceness of family bonds, to be undone by the weight of history. She uses the wonder of magical realism to bring past figures into the present, the dead into life, and indeed the living into death, to enable the ghosts of the thousands who were lynched to enter the current world, to wander among us, searching for something like resolution. She highlights historical realities that continue to haunt. Parchman Prison, the Mississippi State Penitentiary, is very present, foreshadowing the mass incarceration of today. Hundreds of Freedom Riders were imprisoned there. Stokely Carmichael, John Lewis, James Farmer, all spent time there. I drove by Parchman almost three years ago. Knowing what has gone on and continues to go on behind the drab buildings, the empty fields, the cavernous, ominous space, was profoundly chilling. In Sing, we face the opioid crisis, the profound racial inequities in health care, both physical and emotional. The power of history is expressed through intergenerational trauma: A mother who cannot mother, never having had the space to grieve the loss of her brother; a boy who has to grow up years before he should, without a real childhood; hunger that is so raw it hurts to imagine. Yet none of this is relentless. There is tenderness, sweetness, poetry.

Adrienne Green, in The Atlantic, wrote: “Sing, Unburied, Sing is, ultimately, about a journey home, one where the characters find “something like relief, something like remembrance, something like ease.” I am not sure I agree. Books end. But these characters do not find relief. Neither does the reader. Celeste Ng wrote: “It’s hard to imagine a more necessary book for this political era.” Indeed.

Judy Howard was a faculty member in the Sociology Department from 1982 until her retirement in 2017.  She served as the Chair of the Department of Gender, Women, and Sexuality Studies (then Women Studies) from 2001 – 2005 and as Divisional Dean of Social Sciences from 2005-2017.  Her Aussie, Maggie, made a deal with her that if she retired, they would be able to take a good walk at least once a day, preferably off leash.