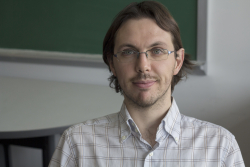 Determining how many people live in Seattle, perhaps of a certain age, perhaps from a specific country, is the sort of question that finds its answer in the census, a massive data dump for places across the country.

But just how fresh is that data? After all, the census is updated once a decade, and the U.S. Census Bureau’s smaller but more detailed American Community Survey, annually. There’s also a delay between when data are collected and when they are published. (The release of data for 2016 started gradually in September 2017.)

Enter Facebook, which, with some caveats, can serve as an even more current source of information, especially about migrants. That’s the conclusion of a study led by Emilio Zagheni, associate professor of sociology at the University of Washington, published Oct. 11 in Population and Development Review. The study is believed to be the first to demonstrate how present-day migration statistics can be obtained by compiling the same data that advertisers use to target their audience on Facebook, and by combining that source with information from the Census Bureau.

Read the full UW News story about this study.