An Appreciation of Stew Tolnay, Written by María Vignau Loría 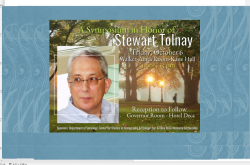 In Grad School, many of us often dream of becoming “great scholars.” What, however, is, the mark of a “great scholar”? And how do we define or measure that greatness? Some people in the social sciences –university committees, award boards, and research councils– have well-established metrics and criteria for the accomplishments that characterize a distinguished academic career.

Using any of these metrics, Stew Tolnay’s career would certainly qualify as great. He has written 5 books and more than 80 research articles and book chapters. He’s won many research and teaching awards, received multiple fellowships and grants, was editor for the most important journal in his field, directed many dissertations and theses, and chaired numerous committees, organizations and even our Department of Sociology.

His scholarly contributions to the fields of historical demography, migration and racial violence reflect his particular approach to scientific inquiry. Stew’s work brings forth the silenced voices of countless victims of racial violence and racial inequalities, and, through the study of the historical roots of social and demographic processes, he has shed light on contemporary patterns and dynamics of racial stratification, disparities and inequities. Additionally, he has compiled unique sources of data (notably, the construction of an inventory of lynch victims between 1882 and 1930 with Woody Beck) and used them to produce knowledge of historical phenomena whose consequences resonate loudly today.

Stew’s selfless dedication to other people’s work extends well beyond his immediate colleagues and students. This was evident in his work as editor of DEMOGRAPHY, where he took the time to carefully review each submitted manuscript, and was always happy to help transform good ideas into good papers.

But there’s much more to Stew’s path and achievements as a scholar. There’s a greatness and substance to his work that a list of accomplishments can’t entirely capture.

Stew’s career has been characterized by his boundless generosity –a generosity that is present in all his interactions and evident in all aspects of his work.

As a mentor, he stands out for the remarkable time and effort he puts into every aspect of our training, for teaching us to think creatively and encouraging us to become our own critics. He’s helped me turn my vague and fuzzy ideas into coherent research questions. He’s read every word of every piece of work I’ve sent his way, doing so with genuine interest and a critical eye that is also kind. His thoughtful guidance, combined with his pragmatic and sensible advice –and his sarcastic but gentle sense of humor– is appreciated and recognized by all his advisees. It is not surprising then that he has launched several careers, and that many successful scholars in our discipline mention the significance of his influence in their trajectories.

At the same time, Stew is well known for caring about his students’ wellbeing. He’s listened patiently to my concerns about Graduate School and, lately, living in the U.S., and has always shown me great kindness, understanding and empathy. He took my parents to dinner when they visited from Mexico and made them feel welcome and esteemed. He’s shared my excitement and laughter on the crazy experiences I’ve had since I moved to Seattle, while offering great suggestions for new adventures and places to visit.

He is also an excellent teacher who cares deeply about each of the students in his classes. Stew is able to turn even the most mundane matters into learning opportunities, making them useful and relevant for students. Additionally, I’ve seen him take many opportunities to teach beyond the topic of his classes; sometimes it is music or art, other times it is history, and oftentimes it is meaningful reflections about the world we live in and our potential for its transformation.

In his everyday interactions in the Sociology Department, Stew makes people feel welcome and included. He can easily surprise you with a good joke, a dry comment on the state of current politics, or a life lesson that comes out of nowhere. It is evident to all of us that he cares deeply about students’ lives and he has worked hard, as a member of different committees and as Chair, to improve our experience in Graduate School, academically and comprehensively.

A couple of months ago, I shared with Stew my doubts and fears on staying in Academia after Grad School. Like he’s always done, he listened to me genuinely. But a week later, when we met again, he said he had not done my fears and doubts enough justice, and he humbly made a case for Academia. He told me that there is no other job in the world as rewarding and valuable as educating and fostering students, feeding their passions, watching them grow and, eventually, go out in the world and make an impact. That privilege and responsibility, he said, is worth all the sacrifices we make in this profession. And that, I understood, was Stew’s own view on the meaning of his work.

In every interaction I’ve had with Stew, I’ve witnessed the humanity, courage and commitment that underlie his work. His influence has left a mark in my very understanding of the discipline and his training is evident in my practice of it. He has helped me grow as a scientist while reminding me of my responsibility towards society. He has set an example for what I understand as greatness.

His legacy, both through his own extensive and excellent work and in the many ways he has directly and indirectly shaped and advanced the work of others, will echo in the fields of sociology and demography for many years to come. His generosity, that trait which has characterized his work, will leave a mark in all of us who have had the privilege to learn from him.

María Vignau Loría is a graduate student in the Sociology Department.  She is interested in the processes of reintegration of Mexican returned migrants,  Her MA thesis examined returnees’ health trajectories upon return to Mexico and how they vary according to their health trajectories while in the United States.