The Righteous Mind by Jonathan Haidt.  Recommended by Edgar Kiser 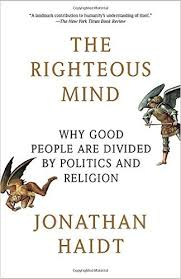 Why has politics in America and Europe become so polarized and partisan in the last few decades? Journalists, political scientists, and sociologists have all attempted to answer this question, but one of the most interesting attempts I’ve seen comes from a cognitive psychologist. The first 75% or so of ’s The Righteous Mind provides a novel and compelling analysis of the evolutionary and cognitive microfoundations necessary to understand this phenomenon, and the book is worth reading for that reason alone, but I’ll also warn you that when he strays from his disciplinary turf and attempts a bit of Durkheimian macrosociology in the last 25% of the book he’s on much shakier ground.

Haidt begins with two premises now widely accepted among cognitive psychologists: (1) people do not come into the world as blank slates to be shaped only by socialization, our brains have been have been constructed by the same evolutionary causal mechanisms that produced our thumbs, lungs, etc.; and (2) most of what happens in our brains is automatic, emotionally-based, and inaccessible to consciousness or introspection, the conscious part is the tip of a large iceberg (this is often called a “dual process” model). His main argument is that our moral righteousness (the source of our political partisanship) is not the product of deliberation in the rational, conscious part of our brains (the main function of that part is to provide supportive rationalizations) but is an evolutionary adaptation that was selected for because of the need for us to justify our actions to maintain our reputations and to defend the groups we belong to, both of which were essential for both individual and group survival (this is a multi-level selection model) in the small tribal societies in which our brains were shaped.

This part of the argument implies that we will never be adequately self-critical of our moral values -- the part of our brain that constructs them is not amenable to introspection or analysis and the conscious part of our brain is designed to defend them (it functions more like a politician seeking votes than like a scientist seeking the truth). The only way to break through the strong innate defenses of our moral values (and because of those defenses, it rarely works) is discussions with other people with different moral intuitions – this provides a strong argument against homophily in friendship networks and in favor of diversity in workplaces.

Haidt then turns to the content of moral values. He argues that there are five main foundations of moral values – harm, fairness, loyalty, authority, and sanctity (like any typology, this one risks oversimplification, but my sense of elections in the developed world over the last several decades suggests is pretty close to the mark). Contemporary liberals tend to rely on only the first two of these. Their moral/political values focus on preventing harm and on fairness defined mainly as equality of outcomes. Most liberals do not incorporate the other three foundations: their universalism often makes them uneasy about nationalist loyalty, they reject many forms of authority, and they often jettison or deride religious sanctity. On the other hand, conservatives generally employ all five foundations (although they define some differently, fairness for them becomes proportionality, getting what one deserves based on ones’ actions), which gives them an important advantage in political contests. Their belief in maintaining a strong moral community allows them to draw on the strong emotions often associated with nationalistic loyalty, authority (family values, law and order), and religious sanctity.

So where do these moral values come from? First, from our genes: from basic personality dispositions that are about 33-50% inherited. People who are high on “openness to experience” and low on “threat sensitivity” are predisposed to be liberals, whereas those with the opposite personality characteristics are predisposed to be conservatives. But biology is not destiny, and Haidt incorporates ideas from sociology and cultural anthropology (mainly using an outdated Parsonian version of Durkheim) in the last part of the book to supplement his psychological arguments. This is obviously necessary, because the question about increasing partisanship that he starts with is temporally and spatially specific (why here? why now?), so the universal cognitive psychology he uses (referring to all people all the times) can’t account for that variation. I hesitate to be too critical here, because I know all too well the danger of being a dilettante in other disciplines, so I’ll just end by saying that I think Haidt has given us some useful ideas about microfoundations, but there’s still a lot of work for sociologists to do on the macro side of this important question.

Edgar Kiser teaches courses on social theory and social thought, and directs study abroad programs in various European cities.  A failed poet, he is a denizen of jazz clubs.