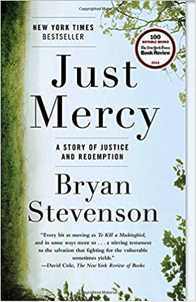 Just Mercy, written by attorney and Executive Director of the Equal Justice Initiative, Bryan Stevenson, is not a book one easily forgets. It is, instead, saddening, inspiring, infuriating and motivating – all at once.

Bryan Stevenson is a master story-teller, and has been advocating on behalf of the condemned and marginalized for decades. He uses this memoir to tell the stories of people whom most of us would prefer to not to hear or think about – people who have been accused of committing abhorrent crimes, and who have themselves been the victim of abuse, neglect, violence and discrimination. We may not want to read these stories, but we should; they have much to teach us about violence, justice and redemption.

In telling these difficult stories, Stevenson shows how the violence visited upon too many young people not only begets more violence, but is so handily erased when prosecutors, judges, and juries hold children as young as 13 criminally responsible for their harmful acts. In such cases, the child is deemed solely responsible for his or her behavior, while the rest of society, which has so utterly and profoundly failed these children, is found innocent.

The erasure of the violence that so often foreshadows criminal conviction is a remarkable feat. Researchers have amassed a mountain of evidence showing that people convicted of violent crimes, and prisoners in general, experience violence and assaults, often throughout their entire lives. Indeed, chronic deprivation and long-term abuse is the norm in the biographies of those serving time. The stories Stevenson tells remind us that we ignore this mountain of evidence at our peril. In telling the stories of those we condemn to spend the remainder of their lives in prison, Stevenson also unearths the lies upon which we as a society rely: that the world can be neatly divided between the good and the evil; that we (the good) bear no responsibility for the collective and structural forms of violence that permeate society; and that safety can be secured by locking away those whose stories call these myths into question.

But Just Mercy is not only despair-inducing; it is also inspirational. In the stories he tells, Stevenson reveals the resilience, the grace, the humor and the humanity of our throw-away people. And in telling his own story, he also shines a light on the individual and collective effort that is needed to create a more just and inclusive world. And he makes you want to try.

Katherine Beckett is a professor in the Departments of Sociology and Law, Societies & Justice. She teaches LSJ 200, Drugs, Law and Society, and other courses on law and punishment. Her work on race and drug law enforcement in Seattle helped build momentum for a new approach known as Law Enforcement Assisted Diversion. She is also an advocate of restorative justice alternatives, and currently volunteers with the Concerned Lifers Organization and the University Beyond Bars at the Washington State Reformatory.