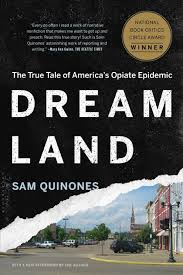 How are these events connected? For the complete and fascinating answer, I recommend that you read Dreamland: The True Tale of America’s Opiate Epidemic by  (Bloomsbury, 2015). In the meantime, here are a few highlights.

After decades of strong resistance to prescribing narcotics for pain relief, the U.S. medical establishment was rocked by Porter’s and Jick’s letter to the New England Journal of Medicine. Although it was only one paragraph in length and was not based on a systematic study, their conclusion about the low risk of narcotic use was soon accepted as a cornerstone in the scientific basis for more broadly prescribing narcotics, even for the treatment of chronic pain.

The pharmaceutical industry unscrupulously leveraged the new scientific consensus regarding the safety of prescription narcotics to aggressively market the drugs to physicians, including the newly developed OxyContin. The number of legal prescriptions of opiates mushroomed and black markets developed apace. As a result, the company Purdue Pharma hauled in huge profits while millions of Americans became addicted. Ultimately, for its misdeeds, Purdue paid a $634.5 million fine to avoid prison sentences for its executives.

Even as access to prescription narcotics increased, the illegal use of black tar heroin grew cheaper and easier, thanks to the great efficiency of distribution networks organized and run by the “Xalisco Boys” from the Mexican State of Nayarit. By adopting a “pizza-delivery-like” model, the Xalisco Boys reduced the risk, stigma, and cost associated with using pure black tar heroin. When changing medical practices and law enforcement intervention eventually reduced the supply, and increased the cost, of prescription narcotics, the Xalisco Boy’s heroin was there to plug the gap.

During the same time period, shrinking opportunities for many white Americans with low levels of schooling, living in areas with stagnant or faltering economies, contributed to the increased use of prescription narcotics (legally and illegally) and of Mexican heroin, leading to a dramatic rise in addiction. In turn, this same population group experienced a nearly unprecedented rise in mortality. Researchers Case and Deaton attribute this surprising reversal to what they refer to as “deaths of despair,” from increasing suicide and drug overdoses.

President Donald Trump announced in August of 2017 that this unfortunate sequence of events has resulted in a “national emergency.”

Scientific misconduct. Medical malpractice. Corporate greed. Aspirations for upward mobility. Regional economic decline in America. A failing social safety net. An inadequate public health infrastructure. Political disinterest. These are some of the many themes running through Dreamland and that make it excellent reading.

Stew Tolnay, who received his BA, MA, and PhD. from the UW department of Sociology, was a member of our faculty from 2000 until his retirement in 2017. He regularly taught SOC 300, our required Logic of Inquiry course, as well as courses on demography and race relations. He is an avid cribbage player and devoted dog owner.