The Ballad of Black Tom by Victor LaValle.  Recommended by Steve Pfaff 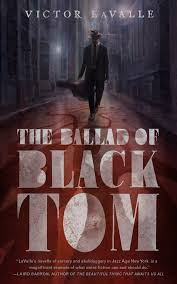 Like many fans of "weird fiction" and supernatural horror, I have been drawn to the work of H.P. Lovecraft (born 1890, died 1937) since I was a teenager. Lovecraft has had an outsized influence on the development of modern American fiction and especially to the horror and science fiction genres. Besides being original, entertaining and highly quirky, Lovecraft's work is important because it changed how we think about horror. Lovecraft pivoted away from traditional horror inspired by theological notions of good and evil and developed a rival concept of "cosmic horror" in which it was the utterly alien nature and total indifference of the universe to human affairs which produced terror.

Lovecraft read a lot of popular science and thought about the implications of a limitless universe and the upending of the supposed laws of physics. If there were conscious alien life forms somewhere in the vastness of space, what would they be like? He posited that they would not be humanoid. Categories born of the human mind would be irrelevant to understanding them. They would be amoral and totally different from humanity. If humans encountered these beings, in their fear and bafflement they would make of them gods and demons. They might try to serve them through secret cults which in hopes of sharing their supernatural powers and attaining mastery of the world. Ultimately, however, they would be driven mad by the inscrutability of these beings or be destroyed by their indifference to human welfare.

In a host of weird tales, Lovecraft explored these ideas in the terrifying and doomed encounters and between the alien things and humans. His protagonists are scientists, professors, writers, antiquarians, and the like who uncover evidence of these beings and are forced to reckon with the frailty of humanity in the face of extraterrestrial horror. Inevitably, they find that the life of the mind fails them and that their efforts to stave off cosmic horror come up short. Little wonder that Lovecraft's work has been so appealing to bookish types (in other words, to nerds)!

There are a lot of troubling things about Lovecraft's work. One of the most outstanding problems with Lovecraft is his bigotry. Lovecraft was afraid of the non-Western world and often portrayed it as troubling and horribly alien. He depicted non-whites in unmistakably racist terms. Women hardly feature in his stories and, if they do, it is generally as sinister figures or as victims of sorcerers and evil cultists.

How do we grapple with a writer like Lovecraft? One valid response is to denounce him and avoid his work as offensive and anachronistic. Another is to dismiss it as hokey. But if we like the literary genres he influenced and find that his work has power and ideas that are still worth exploring, we can also critically engage him and, perhaps, even rewrite Lovecraft against Lovecraft.

That is what writer Victor LaValle (born 1972) does in his intriguing and powerful novella, "The Ballad of Black Tom", published in 2016. Like me, LaValle has always been fascinated and repelled by Lovecraft. A fellow New Yorker, LaValle has always been especially troubled by Lovecraft's hostile and racist depiction of a multicultural New York City. Lovecraft lived briefly in NYC and was especially appalled, as he put it, by "gangs of young loafers & herds of evil-looking foreigners that one sees everywhere in New York." Friends reported that he would become overcome with rage when forced to traverse racially mixed spaces in the sprawling city.

LaValle responded by writing a book that takes up Lovecraft's themes -- only with a black protagonist and a story that explicitly confronts the racism of 1920s America. LaValle explores what drives people to desperation and madness and why they would flirt with supernatural horrors even when they threaten human annihilation. LaValle's engaging book uses a story set in a different time and with strong elements of fantasy to ask hard questions about race, alienation, and violence in American culture. The result is a work that helps reinvent Lovecraft and contributes to a living and vital tradition of American horror writing.

THE BALLAND OF BLACK TOM.  2016.  WRITTEN BY VICTOR LAVALLE. PUBLISHED BY MACMILLAN.

Steve Pfaff teaches courses on research design, social theory, and the sociology of religion.  A native of Staten Island, he has lived in Austria, Germany, and Spain.  In 2018, he and his family will spend six months in Abu Dhabi.